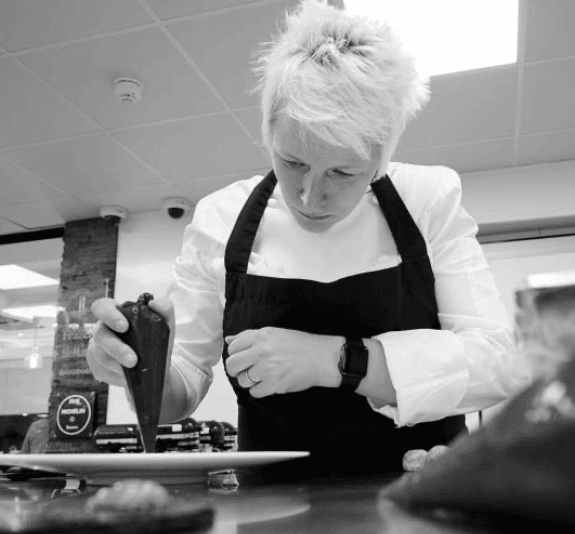 Born in Lancashire, England, Lisa Goodwin-Allen became interested in cookery at school, enjoying the opportunity to be creative and express herself. After graduating from college, she worked in several prestigious restaurants, including the two Michelin-starred Le Champignon Sauvage in Gloucester, before arriving at Northcote at the age of 20. Within just a year, she was made chef de partie, working her way up to becoming head chef at just 23, one of the youngest chefs to lead a Michelin-starred kitchen at the time.

Over the last two decades, Lisa has helped maintain Northcote’s Michelin star, using seasonal, locally-sourced ingredients that incorporate her Lancashire roots into her creative dishes. She has become a familiar face on British television, including serving a rabbit and leek turnover to Prince Charles during a banquet to celebrate the National Trust on the BBC’s Great British Menu (which she won in 2010, and was a finalist the following year and was the only chef in the history of the show to have all three of her dishes in the banquet in 2020). As well as returning to the Great British Menu as a guest judge in 2016, she has also been a chef mentor and judge on MasterChef: The Professionals, and Celebrity MasterChef.

Lisa Goodwin-Allen will be hosting exclusive dinners at Soneva Fushi and Soneva Jani from October 19 to 28, 2022.