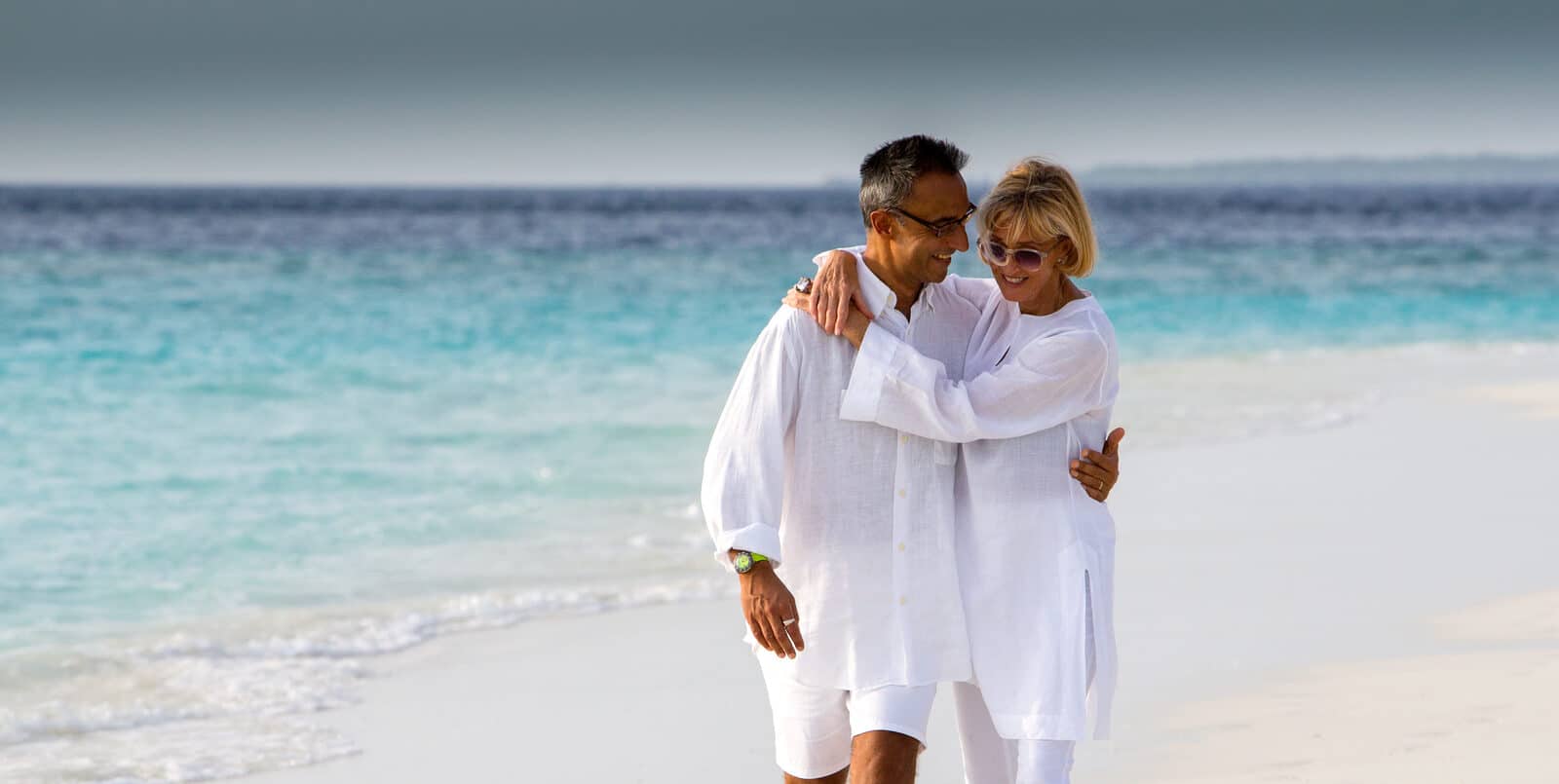 Sonu guards and nurtures Soneva’s culture by emphasising the beliefs, values and language that drive behaviour within the organisation. Born in England, he was mostly educated there, with some time spent studying in Nigeria and Switzerland. He is an alumnus of Eton College and a graduate of Oxford University, where he earned an MA in English Literature. During his time at Oxford, Sonu met his Swedish-born wife, Eva. They fell in love with the Maldives and leased an island there in 1990. After some effort and considerable good luck, their first resort, Soneva Fushi, opened in 1995. As a pioneer for luxury and environmental responsibility, Soneva Fushi redefined tourism in the Maldives and soon became known as the country’s premier island destination.

In the same year that Soneva Fushi welcomed its first guests, Sonu and Eva also launched Six Senses Resorts & Spas, followed by the Evason hotels group in 1997, with properties across Southeast Asia and Europe. By 2011, Six Senses had become a globally recognised luxury spa and resorts chain, with 26 resorts and 41 spas. The management contracts for both companies were sold in 2012 as part of Sonu and Eva’s ‘One Owner, One Operator, One Philosophy’ strategy under Soneva.

Alongside the development of Soneva and Six Senses, Sonu pioneered greater environmental accountability within the hospitality sector and beyond. In 2010, the Soneva Foundation was created as a means to reinforce Soneva’s SLOWLIFE core purpose. Sonu believes strongly that companies must play their part in addressing the problems of the 21st century. This is possible through small changes that do not affect a company’s profitability – in fact, these changes can positively impact a brand’s image while raising considerable capital for good causes. Much of the funding for the Soneva Foundation comes from this strategy. Since Soneva banned branded bottled water across its resorts in 2008, filtering, mineralising and bottling its own water on site, the resultant financial savings have supported clean water projects around the world. After developing a carbon calculator to measure Soneva’s direct and indirect CO2 emissions, as well as external emissions such as guest flights and environmental profit and loss along the company’s supply chain, Sonu introduced a mandatory carbon levy on all guest stays to offset this. This levy has funded the planting of half a million trees in Thailand, the construction of a 1.5 megawatt windmill in India, and the distribution of energy efficient cookstoves to rural communities in Myanmar and Darfur, reaching 297,000 people.

In 2008, Sonu hosted the first of the SLOWLIFE Symposium event series, bringing together some of the world’s most impressive environmentalists to problem-solve the greatest environmental challenges. In 2016, Soneva Fushi hosted the Soneva Dialogue, a meeting between the CEOs of the world’s largest fishing companies to agree common targets and set standards for ocean stewardship. The dialogue directly led to the formation of SeaBOS, a unique collaboration between scientists and seafood companies across the wild capture, aquaculture and feed production sectors, seeking a global transformation towards sustainable seafood production and healthy oceans.

In 2019, Sonu convened the island council presidents of three local communities, along with senior government officials, to launch Soneva Namoona, Soneva’s flagship project that reimagines waste management in the Maldives. Namoona means ‘exemplary’ in Dhivehi, the language of the Maldives, and the project models sustainable waste management and radical single-use plastic reduction. Since the launch of the project, the model has been adopted across the whole of Baa Atoll and the Maldives’ government has announced its strategy to phase out single-use plastics by 2023.

While the evolution of Soneva keeps Sonu quite busy, he also enjoys reading, art, architecture, wine, travelling, wellness and island living in general.

He was recently awarded for his Environmental, Social and Governance efforts by HOTELS Magazine. 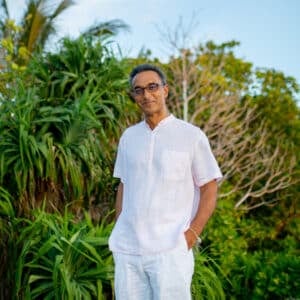 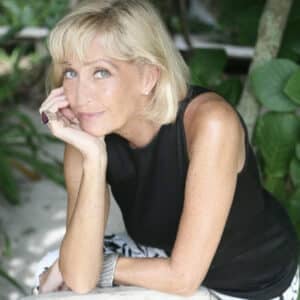 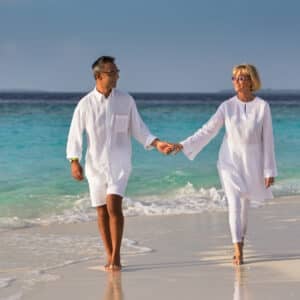 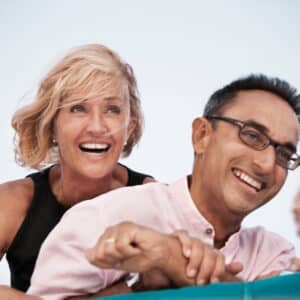 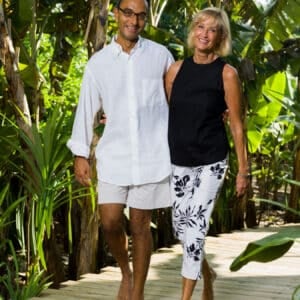 Eva has the challenging role of creating and overseeing all of Soneva’s interior designs. Originally from Sweden, during the 1970s and 80s, she was a top fashion model, appearing on the covers of more than 100 prestigious magazines worldwide. She also ran a successful clothing company, LEVA in Paris, together with her best friend.

She first visited the Maldives at the end of 1970s for a photoshoot. She fell so deeply in love with the country’s beauty, that when she met Sonu in 1986, she brought him there the following year. The rest is history…

Eva is Soneva’s ‘Conscience’, with a philosophy that marries absolute luxury for Soneva guests with her unwavering commitment to using local and sustainable materials, resources and skills.

Passionate about the environment and sustainability, her real flair is in her impeccable taste, innovative and unconventional ideas and her overall daring approach that ensures a different ‘feel’ for every project. Her attention to detail is legendary among her colleagues.

She personally oversees the design of each Soneva villa, incorporating outdoor bathrooms and open-air living spaces that do not require air conditioning. Not a single tree is felled without her approval, not even the smallest branch – instead, villas are built around the trees, and those that are cut are integrated into the design, from bespoke furniture to eye-catching pillars supporting the roofs.

Since the opening of Soneva Fushi in 1995, no plastic has ever been used in Eva’s designs: all amenities are presented in reusable ceramic bottles, and every guest is given a cotton bag so that they can take any plastics, spray bottles and batteries they have brought to the island back home with them for proper disposal. She also placed a box in the giftshop where guests and Hosts could leave their used batteries – and would bring them with her for recycling every time she went back to Sweden.

She ensures that everything that is used or served at Soneva’s resorts is both sustainable, ethical and cruelty-free – and will never use materials or produce that are endangered. Soneva’s hand-woven interiors fabrics were sourced by Eva from a Sri Lankan company that helps rural women find work locally without having to leave their families. Even the pillows and duvets are sourced from a Danish company that is committed to animal welfare, and doesn’t use feather and down from live birds.

Eva instigated the creation of Soneva Fushi’s organic gardens around the year 2000 – today, every Soneva resort has lush island gardens at their heart, nurturing plants and trees for landscaping, and cultivating seasonal fruit, vegetables, herbs and mushrooms for their kitchens.

Soneva’s renowned bicycles were inspired by Eva’s Swedish homeland, where everyone cycles all year round. As well as offering a fun and healthy way to explore Soneva’s winding jungle paths, they also reduce the need to use electric buggies to transport guests, as Soneva Fushi is one of the largest islands in the northern part of Maldives, with large distances for guests to cover.

Eva has been a driving force in protecting the natural environment surrounding each Soneva resort. In 1992, she joined forces with a Maldivian NGO to put a stop to turtle hunting, resulting in the practice being outlawed. She also campaigned for an end to shark fishing in the Maldives, which was finally made illegal in 2010. In 2014, Soneva Fushi became the Maldivian headquarters of the global campaign, ‘I’m FINished with Fins’.

A pioneer against single-use plastics, Eva banned plastic drinking straws back in 1998 and plastic water bottles in 2008, and has played an instrumental role in stopping imported bottled water at Soneva, too. Soneva Fushi had always filtered its own drinking water on site to serve to guests, but in 2010, the resort built a special water bottling plant, producing Soneva Water in reusable glass bottles. Fifty percent of the proceeds from Soneva Water have funded the work of more than 500 global clean water projects and charities. To date, over 750,000 people worldwide have been given access to clean drinking water as a result of this initiative.