The Never Ending Story of my Favourite Fish 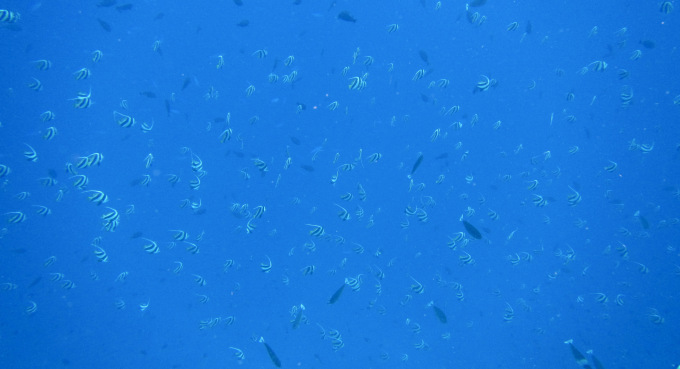 As you know I have a long list of favourite fish and other creatures, Bannerfish are amongst them.
Schooling Bannerfish, Heniochus diphreutes, are somehow magical because they hang around in groups – as told by their common name- , often hundreds of them, creating something that looks like a dancing wall. They are often mistaken for the Moorish Idol, Zanclus cornutus, which instead tends to be more solitary and living on the top reef.

They are normally seen on the edge of the reef, from the first few meters to deep water, and they love spending time where the current hits and splits on reefs. Schooling Bannerfish are planktivores and this area provides the best food for them.

During the past week we had the chance of swimming with them in few locations and we spent a large part of the snorkel just holding in one position to see their behaviour and almost get hypnotised by there movements.
It’s pretty incredible to observe their coordination and their responses to our movements, as soon as we were freediving down all of them would move a bit further away, to then immediately take their position back as we were re-surfacing. In front of them Black Pyramid Butterflyfish, Hemitaurichthys zoster, behind them schools of Unicorn fish, Fusiliers and Snappers, each of which occupying its own position in the water and only temporarily crossing ways with each other.

It is an absolutely mesmerising experience to float in the ocean witnessing something like that, I could totally spend hours amongst the Bannerfish. Enjoy a glimpse of what it looks like…