25 Years as a Trailblazer 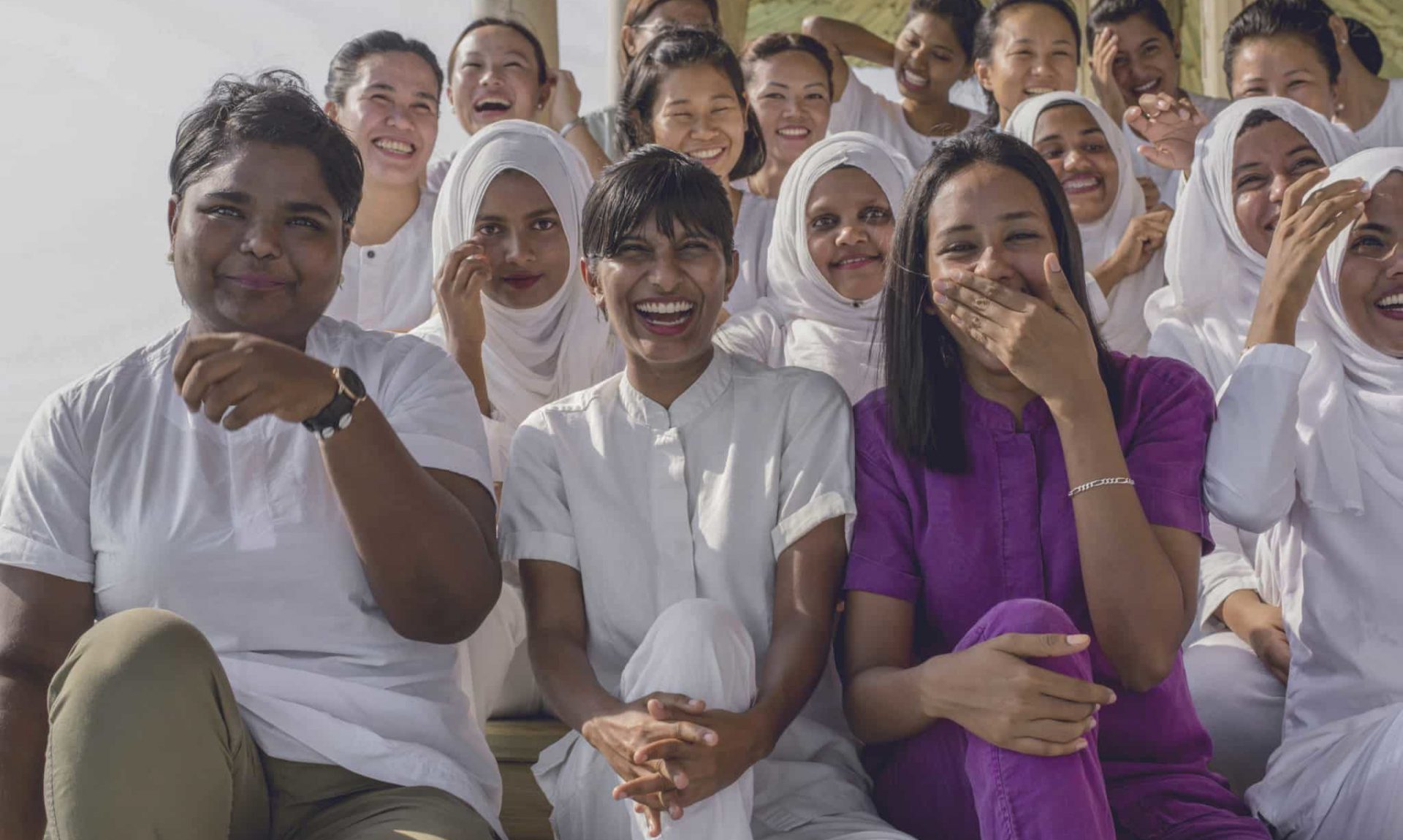 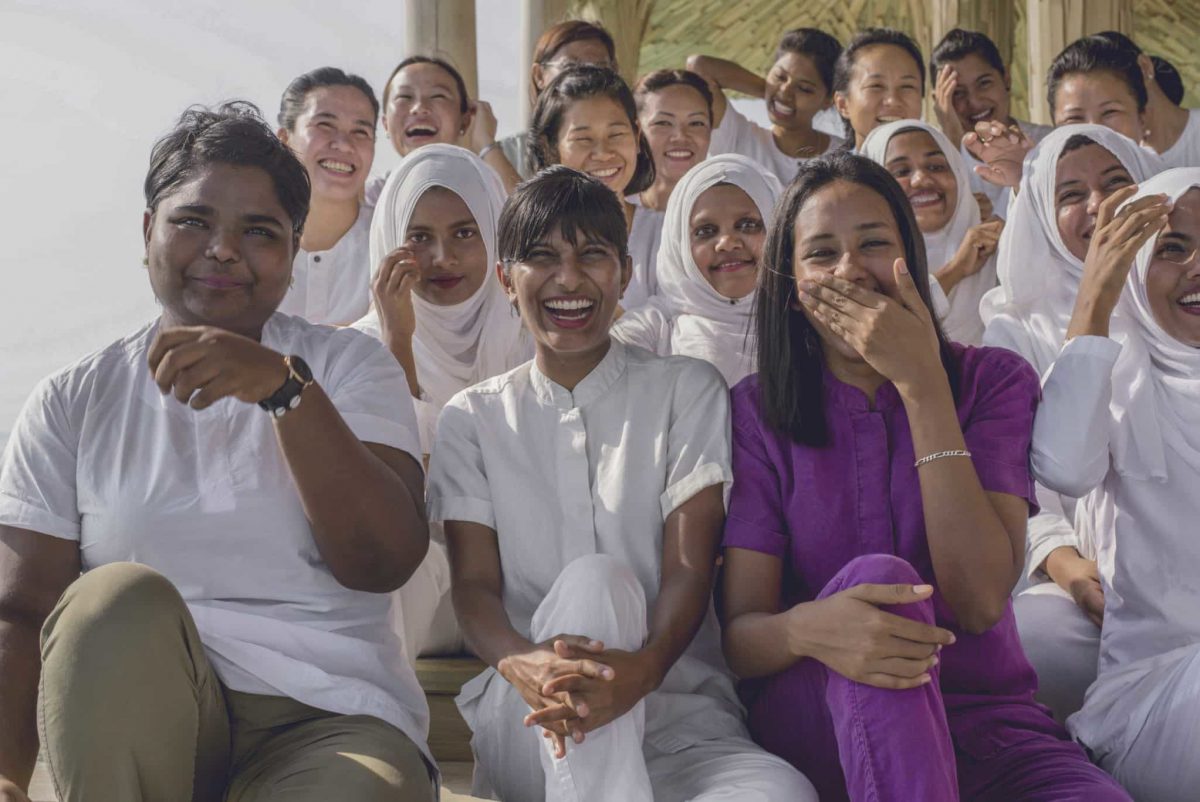 “I was completely blown away. I’d never seen anything like it.” This was Sonu’s first glimpse of the Maldives, flying in with his then-girlfriend, Eva, in 1987. They never looked back. In 1995 – 25 years ago this year – they opened Soneva Fushi, the very first luxury resort in the Maldives.

Things were very different back then. “There was only a handful of resorts and they were very basic, with plastic chairs, strip lighting, salt water showers – and all the food came out of tins”. But it was the landscape that captivated Sonu and Eva, who married soon after. “The first time I put my head in the water I was staggered. The colour, the coral, the fish – it was like being in an aquarium.”

Sonu and Eva fell in love with the Maldives, and returned time and again, but they soon became disillusioned. “We no longer wanted to support the resorts because we could see they weren’t sustainable. Coral was being taken from the reefs to build villas, for example. We felt we could do something different.”

They were right. “Malé, the capital, was tiny in those days, just a few buildings and a handful of cars. The biggest building belonged to the government. I turned up in my shorts and polo shirt and asked if I could lease an island,” says Sonu, with a laugh. It would take several years before the couple received their wish – but it was worth the wait. They discovered Kunfunadhoo, an unspoilt, uninhabited tropical island far from the established resorts, in the pristine Baa Atoll, and began work on Soneva Fushi.

A New Style of Luxury

“It was obvious what needed to be done. We needed to build sustainably, to protect the coral and maintain the vegetation. We needed to make the menus as fresh and local as possible, to offset carbon emissions and to limit and treat our waste. And we needed to get rid of shoes!” That ethos of sustainability – and of chic, barefoot style – has been there from the very beginning.

“The idea of luxury back then was formality and fuss. It was dressing up for dinner, but we wanted to move away from all that,” explains Sonu. Soneva Fushi introduced a “no news, no shoes” philosophy, encouraging guests to disconnect from technology, kick off their shoes and feel the sand between their toes. It struck a chord with those who were seeking a more authentic, relaxed way to holiday – a way that was also sustainable and had a positive impact.

A Team with a Difference 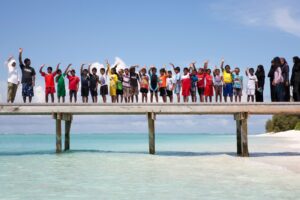 roduced the idea of Barefoot Butlers, a bespoke one-on-one butler service for every villa. “We felt we needed to create a personalised service from the start,” says Sonu, and it was those connections between the team and the guests that further solidified Soneva as a brand that was making waves.

Soneva’s tremendous success allowed it to grow. Next came Soneva Gili (which has since been sold) in 2000 with the first overwater villas in the Maldives, and Soneva Kiri on Thailand’s rainforest-swathed island of Koh Kood opened in 2009. The ethos remained the same: remote areas, extraordinary natural beauty, and a sustainable thread that runs through everything. 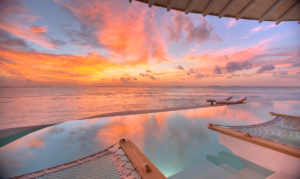 Soneva Villa Ownership followed, offering the chance to purchase a private residence in the sublime surrounds of a Soneva resort, and in 2015, Soneva in Aqua launched, a 23-metre luxury yacht with the experience of a villa at sea. 2016 saw the next Soneva resort open in the Maldives: Soneva Jani in the beautiful Noonu Atoll, a 5.6 km private lagoon with overwater villas (complete with signature waterslides) and island villas with endless views of sparkling turquoise.

Next up: Maldives and Japan

Two more resorts will join the Soneva family in the next few years – one in the Maldives, and another on a jungle island in Okinawa, Japan’s tropical south. What ties all the resorts together is the unwavering commitment to what Sonu and Eva call the SLOWLIFE concept, where incredible experiences create unforgettable memories, all with a minimum impact on the natural world. As well as eliminating plastics, introducing water filtration systems and cultivating organic gardens at each resort, other innovations include building in-resort observatories and glass-upcycling studios. The latest scheme is Namoona, which provides funding, expertise and coordination for waste management systems that clean up local islands.

“We are incredibly proud of this silver anniversary,” says Sonu. “But what we’re most proud of is how our sustainable practices have been adopted elsewhere. Local islanders have changed how they recycle, how they use water and their attitude and approach to food has changed. And to know that we’ve been pioneers in introducing sustainability to the travel industry – that is a fantastic feeling.”

To view Soneva’s full 25th anniversary campaign including a curated collection of videos by Bruno Aveillan, and Soneva’s gallery of old photos since 1995, please visit: https://soneva.com/25-years-of-soneva 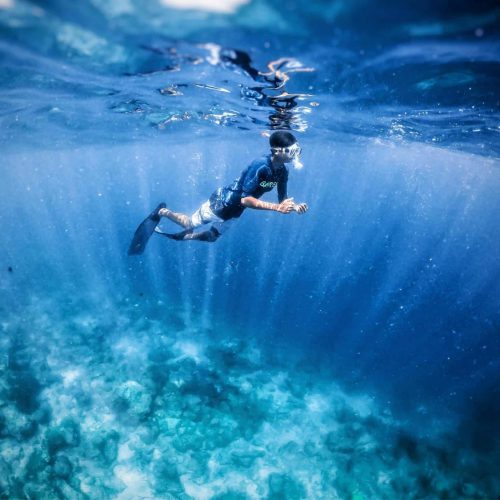 Guests can expect to immerse themselves in Soneva’s sustainable philosophy with garden-to-table experiences, marine conservation and cultural excursions.